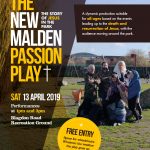 Thank you for the grant for the first ever New Malden Passion Play. It was such an encouragement and gave us the confidence to make a start and keep going. It has been a challenging journey but we have been aware that God has been leading us and it is amazing how he brought people together.

The play was well received and has caused quite a stir in the town. The script was written for the actors and the setting of the park. It was truly inspired, areas of the Park became our set, the children’s playground the place where Jesus meets people and shares his last meal with the disciples, the basketball court the Temple, the wooden play area a Roman encampment and place of crucifixion, a grove of trees the tomb. We had around 200 people at each performance as a well as a number of others looking on at rehearsals. Among the audience were the Mayor and local councillors who all gave very positive verbal feedback.

Churches Together supported the New Malden Passion play, with 7 key churches involved and another 3 supporting it. Overall, volunteers and supporters came from 10 churches and volunteers and cast included people of all ages from children to senior citizens. In addition, the Rotary Club were in charge of stewarding and the Malden Camera Club came along to photograph rehearsals and final production. Their professional photographs are very much appreciated!

Overall, we inspired many people – from the cast, the churches and the local community – with the story of Easter in a unique setting and with a heart-felt performance from very talented and dedicated actors

I would just like to thank you for that amazing event – the New Malden Passion Play.  An inspired vision combined with the support of so many churches and other people and so much hard work from you. It was the most incredible feeling to be a small part of the whole experience.

Many congratulations to all who worked so hard for this – it was brilliant!  An amazing witness to our community – and a perfect start to Holy Week.

I really must say how fantastic the whole presentation was. It certainly moved me with emotions I didn’t  expect. The crucifixion scene was exceptionally well presented and whoever played the part of “Mary” they deserve an Oscar. I’m sure you are not going to let this be “put to bed” but are (and I think you should) do a repeat.