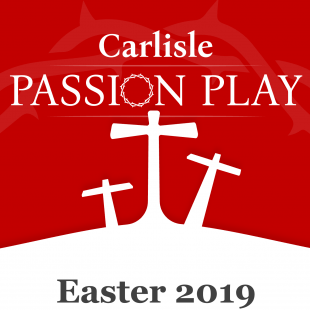 ‘Carlisle Passion Play’ was performed in the City Centre of Carlisle, at 11.00am and 2.00pm on Saturday April 13, 2019, through the support of the local churches in and around Carlisle, and produced by Classic Theatre Cumbria. Each performance lasted about one hour 20 minutes. John Davies was the Artistic Director and the play was written and directed by him. During the two performances, an audience of about 1,000 people watched the Easter story unfold around and amongst them. This modern, contemporary interpretation showed this is a story not just of what happened two thousand years ago but is relevant to today’s society.

Produced by Classic Theatre Cumbria and supported by the Diocese of Carlisle, the Methodist Church, the United Reformed Church, Churches Together, the Salvation Army, and the free churches in Carlisle, this exciting production was a fabulous display for the whole family.

It was real street theatre in the tradition of its English roots in the Medieval Mystery Plays. The Director even included his re-working of the earliest ‘play’ in British Theatre, the Quem Quaeritis? trope, depicting the visitation of the three Marys to the empty tomb. The play began and ended very movingly with this scene.

This play was performed using the whole of the City Centre historical Town Hall Square and a specially constructed stage. It was produced by Classic Theatre Cumbria. Founded in 2014 by John Davies MA, ALAM and Irene Roberts-Green, Classic Theatre Cumbria is dedicated to staging plays in the classical repertoire in support of local charities and, preferably, in interesting venues. John has some amazing ideas for how the Passion Play will be staged.

I was at the Passion Play this afternoon and thought it was brilliant and there were very complimentary comments from everyone around me.  Quite a challenge, putting a play on there and you rose to it wonderfully.  Well done! And what a good turn-out.  So glad the sun shone for you

I found the whole experience exciting, emotional and spiritually uplifting and compelling – it’s created a wonderful memory of working with a great group of people and a great enterprise that will endure for a long time.