“The Passion of Christ” was performed at various locations around the village and in St Mary and St Lawrence Church, which represented the city of Jerusalem. The performance was in four parts, spread over three evenings, Palm Sunday, Maundy Thursday and Good Friday, beginning at 6pm on each occasion, with the final scene, (depicting the women discovering the empty tomb and Mary Magdalene encountering the risen Christ), enacted at 11 o’clock on Easter Sunday morning, as the introduction to the Easter Eucharist. 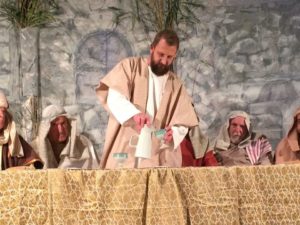 The original script envisaged 69 speaking parts, 10 non-speaking parts, and an indeterminate number of crowd parts. In the event this was far too ambitious. The script was rewritten, eliminating or collating some of the smaller parts.  Other parts were doubled up, and some even trebled up (!), with the same actor appearing in a different role on each of the main days.  The final speaking part was cast on 4th April – five days before the first performance.  In the end, 58 women, men and children, and one donkey, took to the stage over the course of the week, and delivered performances that made a huge impact on the crowds who came to watch.

In all more than 100 people were actively involved in this project.  All of the cast were amateurs, many of them acting for the first time.  And everyone involved in whatever capacity was a volunteer.  The cast included members of a number of churches of different denominations in Chelmsford and surrounding villages, some of whom had taken part in last year’s City Passion production in Chelmsford City Centre.  Others came from local drama groups, and others responded to adverts on social media and in the local press. The stage manager and half of the technical team came from the drama group in the village, as did some of the cast.  A surprisingly high proportion of those involved had no particular faith, but wanted to be involved to resolve something for themselves. 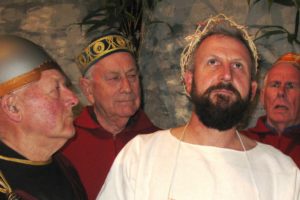 It is difficult to be precise about the number of people who came to watch the plays.  The best estimate is that in total over the three evenings almost 600 people were in the crowds. That includes around 20 people who came out of the pub to watch Jesus being led up to the high ridge outside the village to be crucified.  The congregation in church on Easter Sunday morning was almost three times the normal Easter congregation.

On the financial side, we started with an estimated need of around £4000 to put on this production. The Passion Trust grant enabled us to hire the technical equipment needed to augment the church sound desk, to provide a complete mobile sound system for the outside scenes, twenty two head mikes and stage lighting for the set piece scenes in church. We were able to get a very big discount on this from a local supplier. We produced a background booklet and solicited advertising from local businesses which together with the sales of the booklet more than covered all our printing costs (programmes, posters etc). All of the costumes apart from the soldiers’ uniforms were donated by the people who made them, and the uniforms were either donated or loaned.  A local businessman made the cross and persuaded some of his 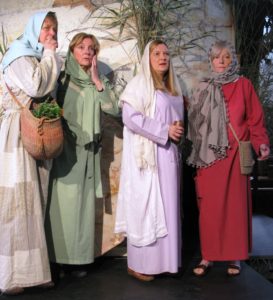 employees to put on rough tunics to perform the business of crucifixion.  He then said he would not present a bill but that this was his donation.  This meant that we only needed to find actual money for sound and light, the website, materials for the scenery, and the hire of the donkey.  So over and above the grant we needed about £1000.  This amount has been covered by donations, bucket collections and the surplus from the sale of the booklets.

The Passion of Christ clearly touched the audiences that came to watch, many of whom were openly moved to tears at some of the scenes, and a number of whom came back into the church at the end of each evening to be quiet, or to talk and ask questions.  But the people who were most moved were the people who actually took part, the cast and crew.  So we’re left with a legacy, not just of a fine set of costumes and scenery and a full range of props, but of a website that is still being visited at a rate of about 20 first time viewers a week – and a group of people who are enthused and eager to do this again in a few years’ time.  Keith Derry (the Director) and I will both be octogenarians by then, but we intend to keep this group together, and encourage them to become the new leaders of the next project in three to five years’ time.