The day was very successful, with over 3,500 spectators. Fortunately, the heavy rain forecast held off till the event finished. We worked with eleven primary schools, through the “Create Bolton Art competition. The town centre chaplaincy partnered to help display this work around the town in the shops and organize the arts competition. We had some beautiful and thoughtful work that depicted Easter hope.

The event had over 170 dedicated volunteers involved which helped it run really smoothly. The contributed in excess of 5,500 volunteer hours. Feedback from those involved suggested that confidence had significantly increased due to being involved and developing new skills and friendships. We worked with 120 churches, who provided support in offering space, publicity, funding and prayer. We had 5 patrons who came from across the church leadership in Bolton – including the Bishop and deans.

We worked with 11 local companies were employed to provide aspects such as the stage, merchandise and printing of publicity materials. Local businesses and shops, particularly on and around Victoria Square were also very supportive, and benefited from increased tourism in the town. The Passion made a good contribution to the local economy though spending the budget largely within Bolton.

We have developed some 15 great partnerships across the town such as Bolton FM, Bolton council, Bolton Interfaith and Create Bolton are but a few. The council relationship with the events team, is worthy of a mention as they have been invaluable in the support they gave throughout the project – despite times of council cut backs. We were also very pleased that local media outlets (Bolton FM, The Bolton News and BBC Radio Manchester), as well as Bolton Council, assisted with publicity through interviews and numerous articles. 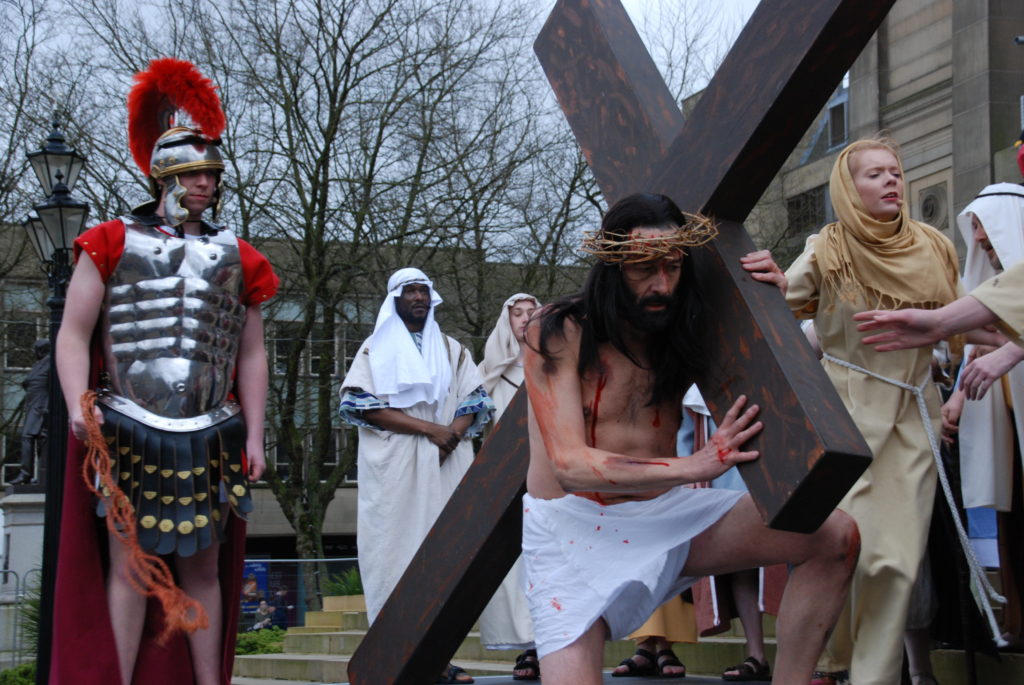 A pretty high bar was set in 2011 but I believe the team surpassed it!
– Canon Matt Thompson – Chair of Passion for Bolton.

The project was a pleasure to be involved with, the spirt and enthusiasm shown by what was largely a voluntary group was a lesion to many. Everyone I came across shared the same “passion” for what was being done and the attitude resulted in a fantastic event. “
Rob Connor – Health and Safety Advisor to the Passion.

In spite of the element conspiring to blow the sound of the choir in the direction of Horwich, they did a fantastic job!
Rev Paul Martin -Chair of the Bolton and Rochdale Methodist District. Patron for Passion.

I felt so privileged to be a part of Passion for Bolton this year – it was a very moving and uplifting experience and something I will treasure.
Antony Slack – volunteer

SearchPostsLogin
Who was Matthew?
Easter Date 2023
Who was Pontius Pilate?
Be part of the Passion Story
1901: Rare Passion Play footage!
Europassion 2023